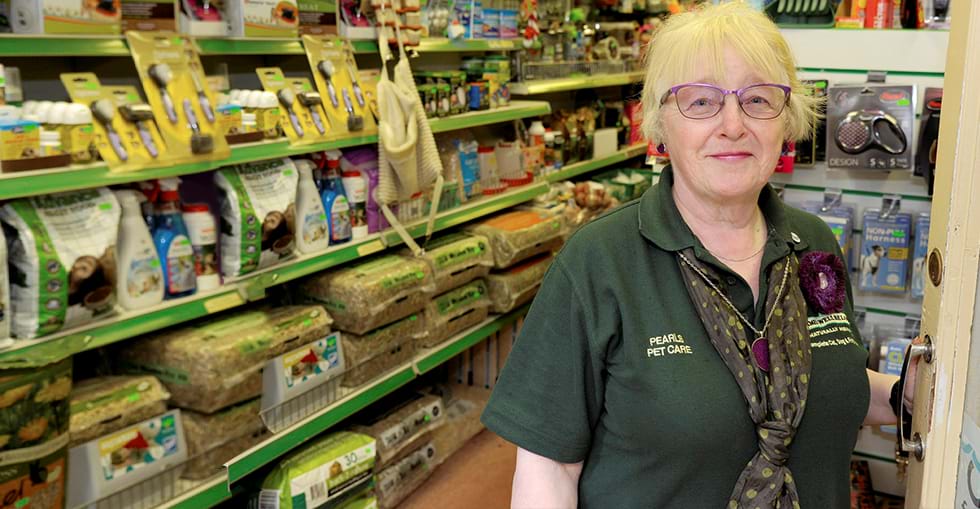 At just two years old the BusinessesForSale.com Small Business Big Heart Awards received entries from numerous businesses that have been supporting charities and communities for far longer. Amongst this year’s litter was a business that stood out not simply for everything it gives, but for how long it has been doing so. Because of this the judges felt it only right it was recognised with a commendation for On-Going Giving.

Pearl’s Pet Care has been giving to its local animal, people and business communities for over 36 years, which amounts to 252 dog years. Based in Forres in the Highlands of Scotland the judges singled Pearl’s Pet Care out for special recognition due to its long-term support of animal welfare, environmental safeguarding, community care and regional business development.

Pearl first opened her shop doors in 1982 and from the very beginning the business supported local pet owners and their pets in a wealth of ways. Pearl says, “The shop is an inviting place, where many come for advice about their pets and so many other issues. They are always sure of a warm welcome. Sometimes they even make a purchase.”

One of Pearl’s first achievements was to support the charity Hearing Dogs for the Deaf which was itself still a puppy of the charity sector in the early 80s. Pearl took advantage of being close to an RAF base and rallied the troops there along with those serving the local police force to raise funds and organise dog training. 36 years on Pearl is still a supporter of the charity.

In addition Pearl has helped her two- and four-legged friends. Numerous animal shelters and people facing hardship have received donations of food and goods co-ordinated by Pearl, and as a result her shop is as much a hub of philanthropic activity it is a place to purchase pet food.

For a full 20-year period Pearl devoted every second Sunday to organising Boot Fairs to raise money for the elderly in her area. Pearl’s Boot Fairs amassed £100K for the older folk in her area and enabled them to enjoy enriching experiences and social events which kept them active and connected them with each other and the wider world, improving the general quality of their lives.

Pearl says, “I love animals, people and the environment equally and believe the impact of each on the other is immense. For me it was a simple and obvious choice to harness the shop to help all those needs and to engage those in the community who had the resources to help. It means the shop is far more than a business to everyone we’ve worked with and everyone we’ve worked for.”

Pearl also promotes good animal ownership via the Local Authority, Schools and Community Groups culminating with the annual Pet Show for which her business provides the prizes and the much-coveted rosettes.

With all the above to commend her it’s little wonder that Pearl’s Pet Care has already received a few rosettes too; before her Small Business Big Heart Award the local Council recognised Pearl’s Pet Care for innovations in use of recycled packaging through the online side of the business.

As an established business with great experience Pearl also finds time to help others in the local business community too. She is keen to help others succeed and encourages new and existing business by sharing her wisdom. Pearl has been a member of the Federation of Small Businesses for many years and has represented members at Local, Regional, National & UK level. She is also currently a member of the Scottish Policy Unit. All on a voluntary basis.

Rufus Bazley, Director of Marketing at BusinessesForSale.com says, “All our regional finalists were worthy contenders, but the judges decided Pearl’s Pet Care and its 36-year long history of giving made it worthy of this commendation. Since Pearl first opened her doors in 1982, as well as providing a varied service to local pet owners and their pets, she has been heavily involved in the community in many ways and we’re delighted to present her with this prize.”

Pearl adds, “The news of my nomination came out of the blue. At first, I thought it was some sort of scam. But this was put to bed thanks to the official emails, messages and telephone conversations. I also received a letter from my MP Douglas Ross congratulating and wishing me and my nominated charity well.”

“There was good media cover from local and trade press. many of my customers and other people from the town and farther afield came in to shop and sent congratulatory messages by email, Twitter, Instagram and LinkedIn.”

Since the award Pearl and her Pet Care business has continued in its mission to help people and animals alike and with just four years to go before she makes the 40-year milestone of running a business with a big heart the diamond that is Pearl will celebrate her Ruby year. What a gem!