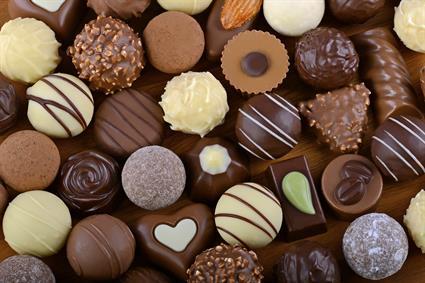 There seems to be a day or a week for almost anything these days, but we’re certainly not complaining because this week it’s Chocolate Week .

Now in its eleventh year and claiming to be ‘the nation’s favourite week’, the UK’s biggest celebration of chocolate comes to London. Running from the 12th-18th October, the week-long celebration ends with The Chocolate Show at Olympia, bringing together the best independent and artisan chocolatiers in the industry.

According to research last year from consumer analyst Mintel, Brits really do love chocolate!  With one in six eating it every day, that’s approximately 8 million of us (only one in twenty of those polled claimed to never eat it).

Mintel’s research found that plain chocolate was the favourite, eaten by a staggering three quarters of those surveyed, filled treats were the second most popular while dark and white chocolate were the least favourite.

The results also found that the 25 to 34 year old demographic consume the most chocolate and overall 26 percent of Londoners eat chocolate on a daily basis.

Senior food and drink Analyst at Mintel, Richard Ford stated in the Telegraph:

‘From the Aztecs to Willie Wonka, in both fact and fiction, cocoa and chocolate have held a special place in people's hearts throughout the centuries.

‘That's no less so today - demonstrated by the fact that just a small minority of Brits say they never eat chocolate.’

Recent years have seen a significant increase in the number of artisan chocolate shops on our high streets, but among the chain stores like Thorntons and Hotel Chocolat there’s an abundance of independent shops cropping up too.

The industry offers a range of opportunities for small business owners and growth in the industry has been driven by several factors and trends:

Changing consumers - We are no longer satisfied with a Mars bar or a Twix. Chocolate connoisseurs are now looking for that little bit of luxury and a new culture of chocolate snobbery has emerged. Fuelling the market for ‘posh chocolate’, artisan is leading the way and banishing the boredom of British chocolate.

The gift market - Sales are particularly high around days like Valentine’s Day, Easter and Christmas, however, the product itself is versatile and it can be the perfect gift for almost any occasion.

Its reputation as a treat or a reward - Its status as a ‘treat’ drove sales during the economic downturn and chocolate has even been considered a ‘recession proof’ industry. Sales remained steady and it replaced other more expensive luxuries making it the affordable alternative.

Businessesforsale.com spoke to independent chocolatier, Russell Pullan, about his business Fifth Dimension Chocolates. Having worked in the media industry for over two decades, Russell decided that he wanted a career change at the age of 49.

It all started as a hobby and after receiving the book ‘The Chocolate Connoisseur’ by Chloe Doutre – Roussell and he was inspired to make handmade chocolates as Christmas gifts.

‘I just made them one Christmas and I enjoyed it, it was good fun and the feedback I got was excellent and now I’ve got a chocolate business’

Now a self-taught, award winning British Chocolatier, Russell set up Fifth Dimension Chocolates in 2013 from his home. He told us:

‘Before I started I was looking at the products I might sell, doing a lot of research, looking at what other people were selling and what kinds of chocolates people like to buy

One of my main concerns was will they sell? Once I’d been to a couple of the chocolate fairs I soon realised I’ve got something that people want to buy’

Experimenting with flavour is one of Fifth Dimension’s unique selling points, pioneering new flavours such as Wholegrain mustard (which one a Great taste award in 2014) and Parsnip and Lime.

Russell’s quirky and contemporary combinations are inspired by his travels and his love of good food. He admitted that he could be eating something within a meal and think ‘this could work with chocolate’ no matter how weird and wonderful.

‘When you put the flavours that I’m using together with the chocolate, it marries the flavours and one particular type of chocolate will work better than another’

‘It may not work the first time…I may have infused it too long or not enough. With herbs when you infuse a flavour too long you can get a completely different flavour’.

His advice to anyone thinking about buying a chocolate business is that ‘people buy with their eyes. If I do something exactly the same as people can buy in the supermarket … then they might go and buy from them’ so try and make yours stand out among the competitors.

He also told us that ‘you have to think about things months and months in advance’. He was thinking about Easter eggs before Christmas and was preparing new chocolates, flavours and products for Christmas in April.

‘There are so many different things to think about. Until you actually do something like this you never realise what’s involved. At one point I just thought making chocolates and selling them seemed like a really nice little idea but there’s a lot more to it than that’.

Have you got what it takes (and the willpower) to become a chocolatier?