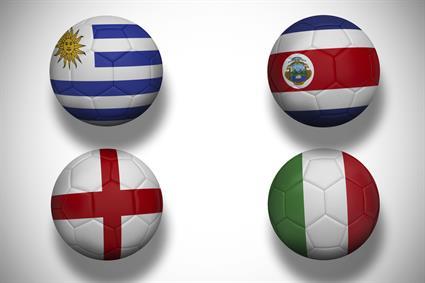 We continue our series in which we look at the business opportunities avaliable in the competing nations of the 2014 FIFA World Cup with Group D.

The most decorated in terms of winners, Group D contains three countries who have previously won the World Cup (England, Italy and Uruguay) and one which acted as the setting for Jurassic Park (Costa Rica).

Uruguay offers businesses one of the most advanced and modernised financial sectors in Latin America. Its tertiary economy includes a large and developed banking sector which is kept stable thanks to its partial dollerisation and its use of the US dollar in nearly two thirds of loans sold by banks.

Its openness to the US dollar combined with its comparatively low wages in the global employment market has seen plenty of interest from Western investors in recent decades. This in turn has led to the conditions and means to fund a higher level of education, making Uruguay's population an ambitious and outward-looking workforce.

For this reason, services, support and customer care enterprises catering to the American market would find an ideal home in the nation often described as “the Switzerland of America".

Browse businesses for sale in Uruguay

With a robust infrastructure and high standards of literacy and education, Costa Rica has long been an important trading partner for Western governments and its central American neighbours. Its openness to free trade and its comparatively low business costs are coupled with a cheap domestic currency.

This has made it a fertile ground for technology and pharmaceuticals firms to set up major manufacturing centres, amongst them Intel and Proctor and Gamble.

Costa Rica relies on the United States for a third of its overseas exports custom, leaving it vulnerable to fluctuations in the US dollar. Increasingly, the Costa Rican government is devaluing its own currency (the colón) to track the dollar. In the short-term, this makes Costa Rican exports a smart investment, and any overseas business buying up the nation's sugar, fish and coffee will make savings on every trade.

Just like their chances in the football, England's financial prospects vary wildly depending on who you talk to. Many commentators claim that the government's austerity programme is hitting middle earners the hardest, and reducing the amount of disposable income available on the high street. Yet at the same time, the government's own statistics paint a picture of good health and recovery.

Regardless of whether the UK's economy is seeing a recovery for the few, or for the many, the nation is one of the most advanced economies in the world and amongst the world leaders for financial services. Having retained the pound sterling, it has the advantage over other EU nations of maintaining control of its own money supply.

As a result, there is a booming market in tangible, wealth-storing assets for the super-rich. From rare wines to gold, jewellery and even fine art, Britain is seeing a boom in luxury goods despite the downturn.

Browse businesses for sale in England

Group D continues to be the group of footballing analogies because – just like the beautiful game – the Italian economy is a game of two halves. Northern Italy is the engine room of growth and infrastructural development which drives Italy up to eleventh in the world's wealthiest countries. Southern Italy, however is dogged by poor infrastructure and soaring unemployment.

Any business looking to expand into Italy will therefore need to do a little geographical planning to ensure success. Luxury interiors, fashion and automobiles may generate handsome profits in Milan or Florence. But if you are looking to bring some money into the south of the country, then tourism remains the safest bet.

Browse businesses for sale in Italy