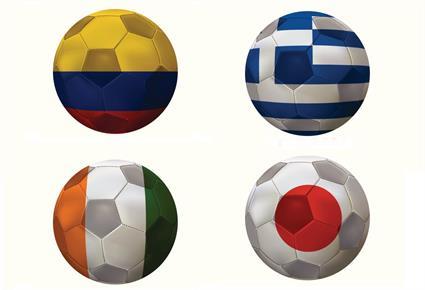 Back of the net (income)!

As we continue to scrape the barrel of footballing/business puns, we also continue our look at the business opportunities avaliable in the competing nations of the 2014 FIFA World Cup.

Today: Group C. While this is perhaps the lowest profile group in footballing terms, each country provides some fascinating business opportunities.

Farming and produce exports are the long-established backbone of the Columbian economy, despite moves towards modernisation in finance and services.

Columbia's close ties to overseas consumers – particularly those in the United States – means that it currently enjoys a relatively stable rate of growth. Soft commodities are the large volume trades here: from world renowned coffee to bananas, cotton, flowers and livestock.

But before you plough all of your efforts into Columbian agri, it is worth noting that the country's abundance of fresh produce is counterbalanced by tight regulations. Exports are matched with subsidized imports which all but negate the country's trade surpluses.

But this situation creates its own set of opportunities, and there is a great need for a tertiary sector to step in and provide value-adding services for the country's bountiful agricultural products. Packaging, processing and branding enterprises may view Columbia as a land of great opportunity.

Businesses for sale in Colombia

Of all the countries competing in the 2014 Business World Cup, few will have as tough a road to success as Greece. The Mediterranean nation was famously hit the hardest by the banking crisis in 2008 and in the intervening years, the financial situation has if anything only deteriorated.

With the government imposing harsh austerity measures on the Greek population as it undergoes restructuring, disposable income is at an all-time low, making this a challenging territory for retailers at the present.

A risk-taking entrepreneur may see Greece as the perfect destination for an export or tourism enterprise to drive foreign money into the economy. But what the country really needs now, more than anything, is a good accountant.

Browse businesses for sale in Greece

With an enviable growth rate of close to ten per cent, the fourth largest economy in sub-Saharan Africa is an attractive prospect for outside investors and business expansion. Economic growth, coupled with a new sense of internal political stability has allowed the central government to invest in infrastructure and several large scale projects.

And here is the opening for many foreign entrepreneurs. Because industry in Côte d'Ivoire is primarily focused on providing services for the agricultural industry: processing and packing, whilst large scale infrastructural services from logistics to project management are underdeveloped areas. Construction firms, developers, and consultants will all play a vital role in the next round of economic growth in Côte d'Ivoire.

Japan's rapid, post-war growth into urbanisation has been followed by a twenty year stagnation from the early 1990s, characterised by low growth and interest rates. Yet despite its struggles, Japan retains the largest trade surplus on the planet as well as the third largest economy.

Japanese exports are technology-driven, high value goods in innovative and competitive markets: from the automotive industry to computing and software design. Domestically, Japan has a shrinking population coupled with frozen wages, which has left the real estate market in a downward trend for decades.

The innovative solution to this has been a trend towards demolishing newly-purchased houses and rebuilding a new property to a higher specification, thereby retaining the invested value of the real estate. For this reason, businesses offering luxury interiors, home renovations and modern appliances such as solar panelling will find a market hungry for their services in Japan.

Browse businesses for sale in Japan