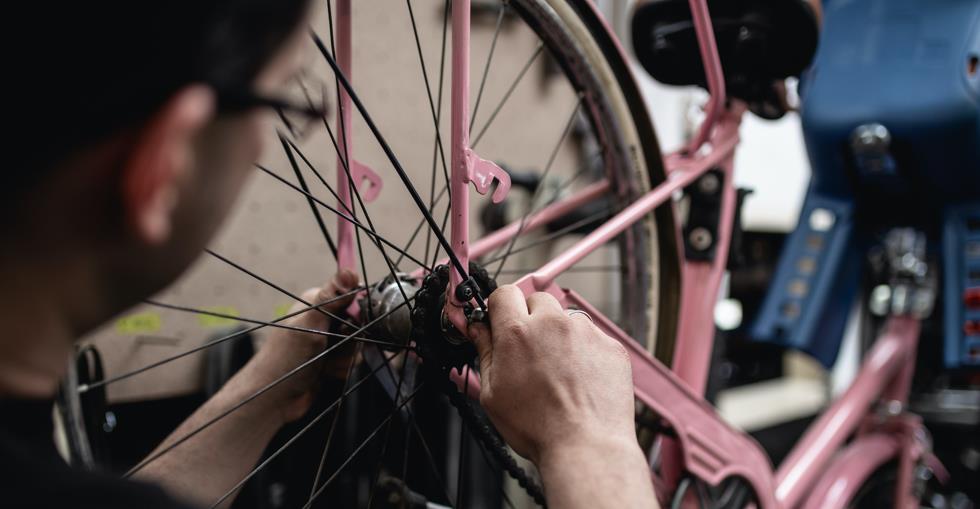 This is a tough market for independent businesses unless you find a way to stand out.

The government plans to double cycle use over the next five years, however, critics are dubious, claiming the proposals lack sufficient funding for infrastructure. Nevertheless, for enthusiasts who are keen to set the wheels in motion and open a bike shop, make sure you’re fully informed of the challenges, trends and developments facing the cycle industry.

The number of cyclists in the UK has dropped from 38% in 2015 to 27% in 2018; however, electric bikes may be the key to propel industry success; the total sales value of this division has soared 15% year-on-year. If you’re passionate about cycling and keen set up shop, you need to find a USP that will set you apart from other retail giants and online traders.

Snapshot of the market

The UK’s bicycle market has seen an overall decrease in volume sales of roughly 17% since 2014. Independent outlets are struggling and retail giants, such as Halfords, have seen flat sales; however, specialist suppliers and premium brands have reported stronger growth.

In 2018, 2.5 million bicycles were sold in the UK, with electric bikes making up 28%. Despite the 3.8% drop from the previous year, annual market value grew 1.6%, to £925 million. Bike parts, accessories and clothing sales contributed to just over half of the total market value. 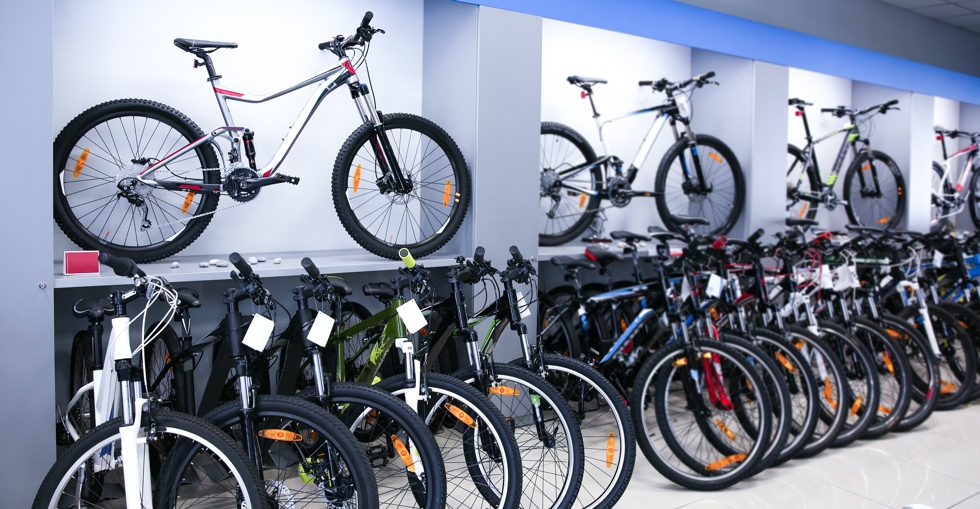 In 2018, cycling accounted for a mere 1.7% of all trips made, and this figure has barely changed over the last 17 years. In the same year, just 1% of the mileage accumulated by all vehicular road traffic was by cycling; in comparison, cars and taxis amounted to 77%.

Many commuters cycle in busy cities to avoid traffic congestion. Public bike shares offering short-term rentals could presumably hurt a local bike shop’s sale figures; however, 18% of those surveyed said they’d gone on to buy their own bike after regularly using bike shares.

Changes in the industry

The government has recently pledged £5 billion over the next five years to improve bus and cycling services in England. Every child in England will also be given cycle and bike safety training, with an additional 400,000 places offered on the ‘Bikeability’ programme each year.

Climate change is a big issue, and the more we can do to reduce our fuel emissions the better; in Britain, 57% of car journeys average a mere five miles or less. Encouraging a mixed demographic of cyclists in addition to the typical – middle-aged men –will help strengthen the market. 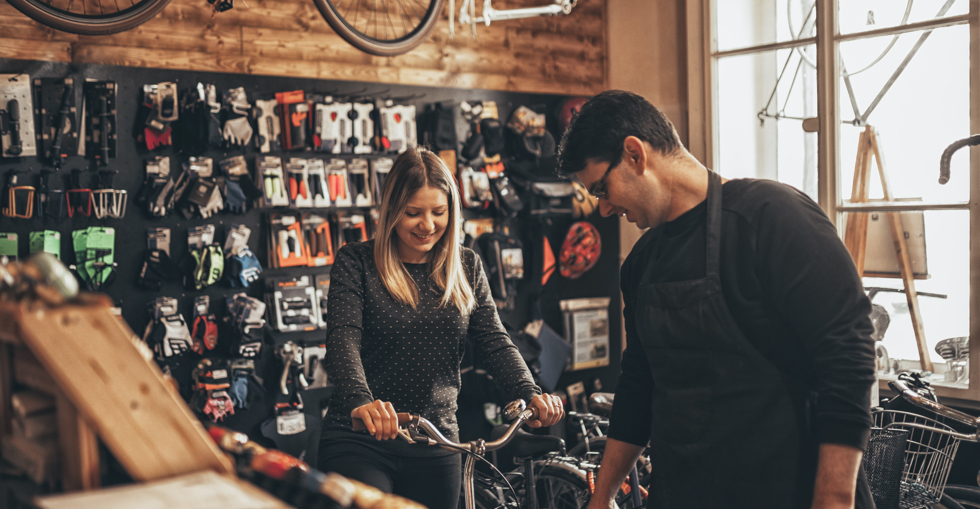 Electric bike sales are on the rise, with 70,000 e-bikes sold to the UK market in 2018 and an 8% boost in imports. Higher-end products in this division are performing well and reports show that 30% of cyclists are either interested in buying an e-bike or own one already.

Competing for sales will be challenging, especially as demand remains stagnant. It’s hard to beat price tags found at mass-market retailers, and savvy online shoppers are cutting out the middleman and buying directly from the suppliers, jeopardising sales for third-party vendors.

Middle-aged British men are increasing their cycling journeys; however, many other demographics are putting the brakes on their bike usage. Due to a lack of diversity, many bike shops are vying for the same business, which is hindering the market growth.

As the impact of climate change brings an increase in storms and floods, many fair-weathered cyclists are leaving their bikes at home. Wet and windy weather can have a hugely negative effect on sales, which is an inescapable and increasing issue for retailers.

To determine the best USP for your business, assess what skills you have. Maybe you’re an e-bike fanatic or perhaps you have specialist repair skills, whatever your USP is, make sure you market it well. As word spreads in the cycling community, you’ll attract more customers. 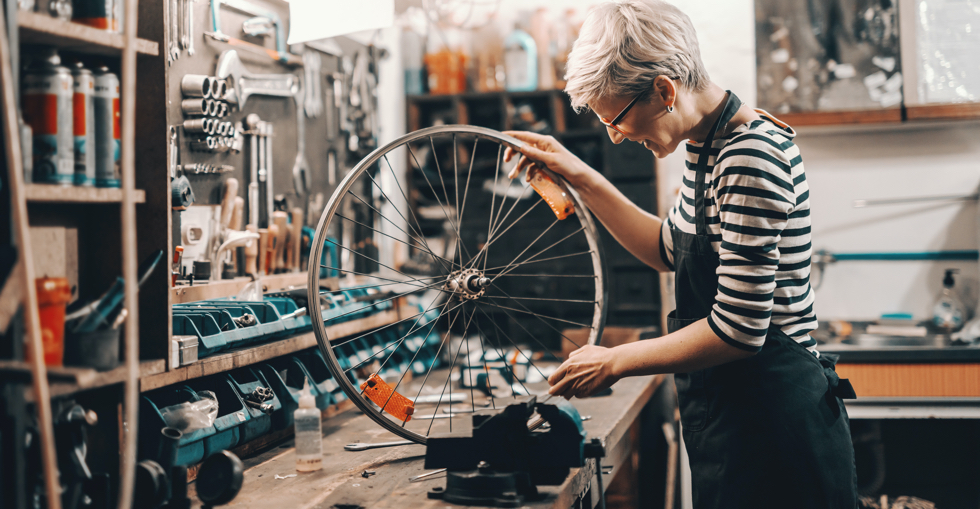 customers for their feedback. To stay ahead of web competitors, promote services that can’t be offered online such as tech-inspired saddle fitting; this will help boost your footfall figures.

To compete with nationwide stores such as Evans and Halfords, offer your shoppers a more personal service, and train your team to do the same. Immerse yourself in the local cycling community by attending events and race days and consider hosting a cycling fundraiser.

Become a member of the Association of Cycle Traders (ACT), which is the UK’s largest cycle trade organisation that has been running for over a century. The group helps more than 4,000 independents by offering business support, training and skills development.

Britain is home to many cycling enthusiasts, creating a wealth of trade magazines, blogs and podcasts that report on sector news and trends. The more research you carry out before opening your bike shop the better and be sure to have a thorough business plan in place.

To boost your skills in selling or repairing bikes, apply for an apprenticeship at a busy store. If you’re keen to gain professional qualifications, Cytech is an internationally accredited organisation for technicians, offering courses in bike mechanics and specialised modules.

Krystena Griffin writes for all titles in the Dynamis stable including BusinessesForSale.com, FranchiseSales.com and PropertySales.com as well as other industry publications.

How to Sell a Bike Shop
There’s every chance of achieving a satisfactory return on investment in a retail segment that is flourishing on an otherwise struggling UK high street.

How to Buy a Bike Shop
Bikes are now big business, but how do you go about buying a bike shop?

How to Run a Bike Shop
The proliferation of bike lanes, cleaner car exhaust fumes and an increase in the standard of bikes at budget prices are among the factors fuelling a boom in cycling