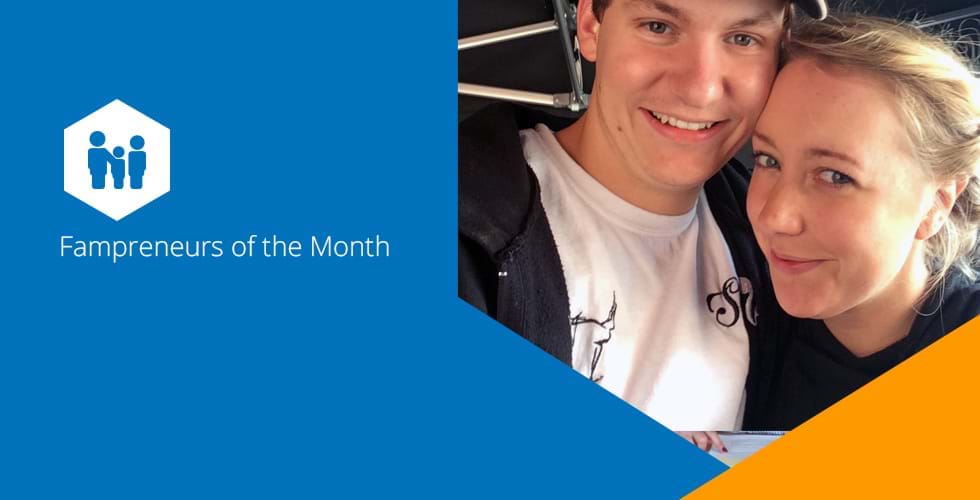 Chris and Emma are a young couple with great ambitions. They first met while working in 1884 Dock Street Kitchen a high profile restaurant in Hull. Chris had been a chef for over ten years, and during that time he’d acquired kudos and experience at some of the country’s top spots including The Fat Duck and The Hand and Flowers. Emma was reception manager and host having previously worked as a store manager for Cafe Nero. Together they launched Shoot The Bull, a catering business bringing fine dining to outdoor venues and in a matter of a few months in are already booked up and busy, making them our fampreneurs of the month.

As their relationship developed the couple soon saw their business ambitions were aligned. Chris had always wanted his own restaurant and Emma was keen to set up a business of her own too.

Realising the leap from restaurant employee to restaurant proprietor was a huge one, Chris and Emma brainstormed ways that they could build their own business using their own capital. “We wanted to do something we could afford without bank loans and came up with the idea of taking the restaurant to the street.” Chris explains.

“We also wanted a memorable and distinctive name and agreed on ‘Shoot The Bull’, an American saying for a casual conversation. We chose it as it certainly gets people talking and thinking, it’s memorable and different. People ‘shoot the bull’ all the time and ours is a business we intend to be talked about.“ he continues.

Although keen to do everything by themselves Chris’ parents Simon and Anne-Marie Harrison offered financial and practical support from the off.

The couple’s first investment was in a Chevrolet step van with a view to customising it to create a catering van for events and pitches in public places. While this was underway Chris and Emma also bought some marquees to pitch at events and went about securing business by calling high profile street food events and businesses and making them aware of their concept.

“The bookings soon came in and our reputation began to get established locally. So much so that we’ve barely had time to work on the van as yet.” Emma says, “For one recent event we were so busy prepping and cooking that Chris’ parents at brought deliveries to us throughout the week and worked for us at the event itself. Anne-Marie was great with the customers while Simon earned the grand title of ‘Fryer Chef”!”

Just a few weeks after launch, Shoot The Bull catered at a local tennis tournament. The event generated just under £10k turnover in a week, at a 60% gross profit margin. Emma says, “It was great to drive home that week, confident in what we could achieve because our product and ideas were so well received.” The organisers have booked Shoot The Bull again for later in the year, for the same event next year and a three-year contract for both events is in negotiation.

And small contracts can really be business acorns. One client ordered a ‘gourmet picnic’ for just four people, he has since been in touch regarding much larger events later in the year.

To date, Shoot The Bull has secured bookings up to Summer 2017 and will be at numerous high-profile events including Trinity Kitchen in Leeds.

Chris says, “Every event is a new learning experience. We’re continually adapting to each different customer base. Which means developing different dishes, making sure the price point is right and being clever with purchasing.”

While most of the work is undertaken by Emma and Chris, Shoot The Bull uses lots of local businesses for the skills they don’t have including an accountant, a marketing and graphic design company, and a uniform manufacturer. Supplies come from the local butchers and fishmongers. Unofficially, Chris also gets support from his siblings. His younger brother works in media so is always giving tips on marketing and his older brother lives near Chicago so gives the business insight into the street food scene over there. And since launch Chris’ parents have helped with all manner of jobs, even the washing up.

“We are both creative, hard-working, motivated and passionate so we are always on the same page and striving to achieve.” Chris says, “I drive the food forward and try to be creative and inventive with that while Emma is great at organising events, the accounts and also a keen baker.”

The only random factor in Shoot The Bull’s business model is the Great British weather. It’s been a baptism of fire for the couple who can now set up and clean down ten times quicker than the early days and pack the van like pros.

In addition an unknown footfall for each event makes planning a fine art. “Although organisers provide footfall projections, they’re not cast iron guarantees. I’m sure our success is because we set ourselves apart and make sure we do all we can to get the custom.” Chris says.

Emma and Chris are enjoying every element of working together, alongside the success they’re enjoying earning money and building Shoot The Bull’s reputation their united passion and commitment makes for a winning team. “We both care equally and are willing to put our all into everything” Emma says, “It’s an exciting experience starting a business together as a couple and watching it grow. We get to travel around together and experience new things.”

But are there any downsides? “I think the worst aspect is that it’s hard to find a cut-off point. We try to draw a line every now and then and have a ‘no work hour’ to make sure we still enjoy our couple time.” Chris concludes.