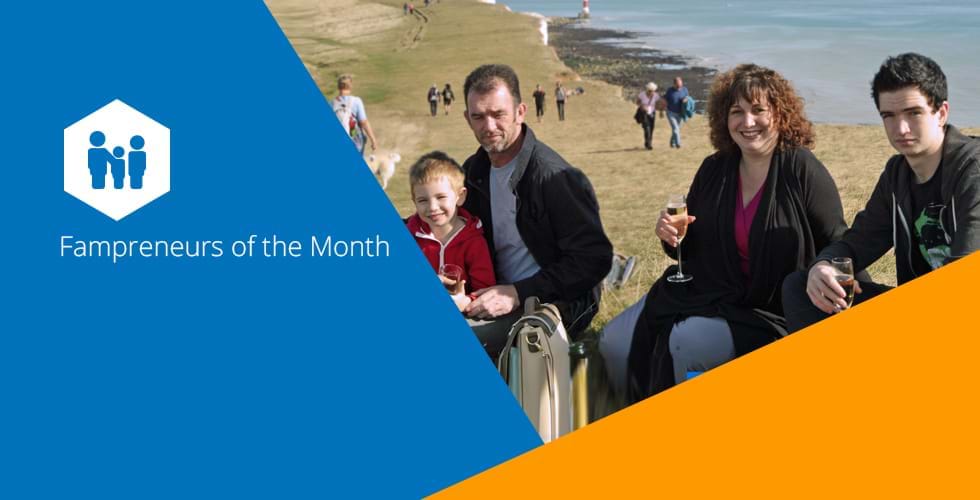 The Couple That Built A Business By The Sea

From lorries and childcare to a hotel by the sea;
how the Browns sold up and headed south.

Judith and Greg Brown were no strangers to running a business, having established and built a childcare service from their last family home in Scotland.

The Browns both had jobs alongside their childcare business; Judith did weekend shifts at Morgan Stanley, while Greg drove a lorry. In time, the childcare business grew to such an extent that Greg gave up driving to work there full time, but the couple wanted a business with a bigger income.

It was towards the end of 2010 when there was talk of cutting tax credits.- Judith explains, We wouldn't be able to put our prices up which meant things would get tight. We’d just had our second child and Greg had become a grandfather for the second time. So we were keen to find a new business with better prospects.

“On a rainy day we were huddled in the car with the children at the seaside.” Greg continues, “We were both thinking about what we were going to do and Judith said how amazing the seaside was even in the rain, so I quipped… 'Let’s go and buy a guest house by the sea'!” Immediately we both just felt it was the right thing to do at that time right time of our lives.

Once the decision was made, Judith and Greg put their house on the market. Before beginning their search the couple made a list of the features they needed, they wanted somewhere in an area popular with families with 9-12 rooms and its own private car park. They needed the building to be in a condition that they could move in and manage straight away so that there would be an immediate income stream.

Neither Greg nor Judith had any experience of the hospitality industry before so they were both prepared for a baptism of fire. “We’ve always been grafters,” Greg says, “so we were excited by the challenge.”

The Brown’s Scottish property sold in April 2012 giving them the capital to proceed to purchase, and they lived with Judith’s mum while they looked for a business.

The first property they found that ticked all their boxes was in Weymouth. Unfortunately the bank was unwilling to loan sufficient funds for the purchase and so the Browns had to pull out of the deal. After that there were a number of businesses that came close to being right but for a variety of reasons none proceeded to a sale.

“Buying a business is just like buying a house and brings with it many frustrating situations because of the many parties involved.” Judith says, “But we persevered and the 20-bedroom Sheldon Hotel in Eastbourne hit our radar. It was bigger than we’d intended to buy.”

Greg adds, “After we’d viewed The Sheldon we went away and did some sums, it seemed too good to be true as it was within our budget. Determined not to lose out we used the money from our house as a deposit coupled with a bank loan backed by the Government guaranteed lending scheme. After our disaster in Weymouth, we decided to use a broker who was recommended by the agent in Weymouth and we are so glad we did. Although it can be costly to use a broker, Terry Yearsley of Arnold Commercial Finance taught us so much and helped us every step of the way. Even now he is still in touch with us.”

After their second viewing of The Sheldon the Browns made an offer, it was accepted and they moved in in December 2012.

When it was on the market The Sheldon was shut, the Browns opened the doors in December 2012, just three days after taking the keys, and now run a thriving B&B business.

Listen to your staff and guests

The Browns put their success down to staying in every room themselves to see what works, and never being afraid to make changes. From day one they’ve always listened to feedback from guests and have never been afraid of a bad review, nor to say no to an unreasonable request. “We consider communicating with each other and our staff paramount, the staff’s feedback is always taken on board and they’re all involved in planning too, after all, they’re the ones in the rooms every day so they have some great ideas,” Judith says.

The Browns also embrace feedback and react to it. “Almost from the start we had problems with family rooms. “Because families often don’t come in neat two adults and two children packages,” Greg explains, “So we always felt we were putting a square peg in a round hole. We upgraded one of our family rooms to a comfort family room for up to five guests of any age. During summer it is full of families, while during the winter workmen use it because it works out cheaper per head.”

Make time for yourself

Running the hotel is very time consuming and Greg advises anyone planning to run a similar business to avoid compromising their own lifestyle too much. “Be sure to make time for yourself, this lifestyle can be exhausting! We only take one week off per year in January, we overstaff at times to take a few hours off each week to spend time doing things in and around Eastbourne with the children. A lots of hotels the owners live in the worst room with the shabbiest furniture, but we wanted to have a nice, relaxing and pleasant place to be during the quiet times. Sure we could make more money if we sold the rooms we are in, but money isn’t everything.”

For Judith, Greg and their family the larger hotel has proved to be the best choice. “If we had gone for fewer bedrooms, we probably would do it all ourselves and missed out on so many cherished family times.” Greg says, “We’d advise anyone making the same move to factor this in to their plans and we’d for those reason we’d certainly recommend a larger business if the budget allows.”