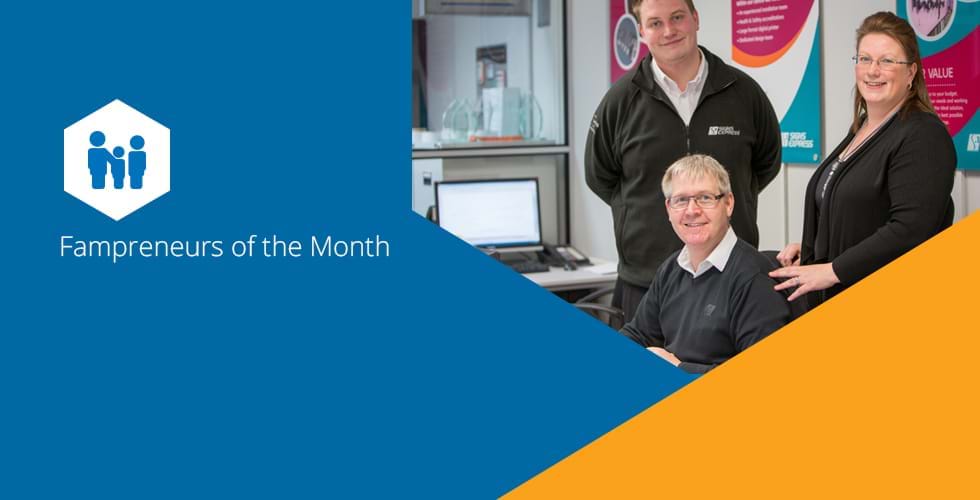 The Family Team who doubled their business in Leeds

Husband and wife fampreneur team Kim and Dave Nurse were like many long-term married couples. Both had good jobs which supported a comfortable lifestyle. Their son Rick was a teenager and was pretty independent. But neither of them was entirely fulfilled at work.

Kim was a pallet manager for a distribution centre and Dave worked in the plastics industry as a market specialist. “We both had secure jobs which we were good at but felt there was something missing,” Dave explains, “And as Rick no longer needed us as much as when he was little we decided it was time to take a leap of faith.”

So the Nurses looked for a fampreneur opportunity that would mean they’d build a business together which would give them greater security, more time together, present a new challenge for them and ultimately give them a real sense of achievement.

“From our established careers it wasn’t obvious which industry we could go into together so we agreed a solid franchise business would be our best route. It meant we could harness the business skills we had and make full use of the resources for those areas where we had less experience and confidence. Being in Leeds we knew we were in a city where there were lots of opportunities with its many independent businesses.” Kim says.

Dave adds, “Although I hadn’t worked in the signs sector exclusively I did have some knowledge of the industry from my time as a trade supplier. I was confident there was real potential in the sector, and the robust structure of the Signs Express Franchise was the final tick in the box we needed to go for it.”

Originally, the plan was for Kim to remain employed to financially support the family during the start-up of the business, but within a short space of time the business was doing so well that she gave up her job to manage the administration side of things. Within two years the business was providing more than enough income for the two of them and their son Rick, who was then 17 and wasn’t enjoying his job, joined the family fold.

Rick took the job as a stop gap but has since worked his way up within the business and is now its Business Development Manager sharing responsibility for sales with the MD Dave. Kim is the Company Secretary and Director.

With Rick on board the centre has become truly family run and has gone from strength-to-strength ever since.

Rick says, “Like most teenagers I wasn’t really sure about the career I wanted to pursue and by working with my family I actually enjoyed a privileged position. It meant I was given opportunities I may not have had at a standard firm, I was trusted with real responsibilities from day one and I worked with colleagues I could comfortably talk to about any issues I met along the way.”

The family all agree it has been the best decision they’ve made as it’s brought them closer together, generated more income than if they’d stayed in their respective jobs and given them greater personal and professional satisfaction than anything else.

Dave concludes, “We’re 13 years in and counting and can see ourselves continuing to grow the business for the rest of our working lives. It’s a privilege to work with the family and we all take great pride in each other and what we do. If I had any advice to share with a family working out whether to become fampreneurs I would encourage them to ‘sign up’ with a franchise like we did!”