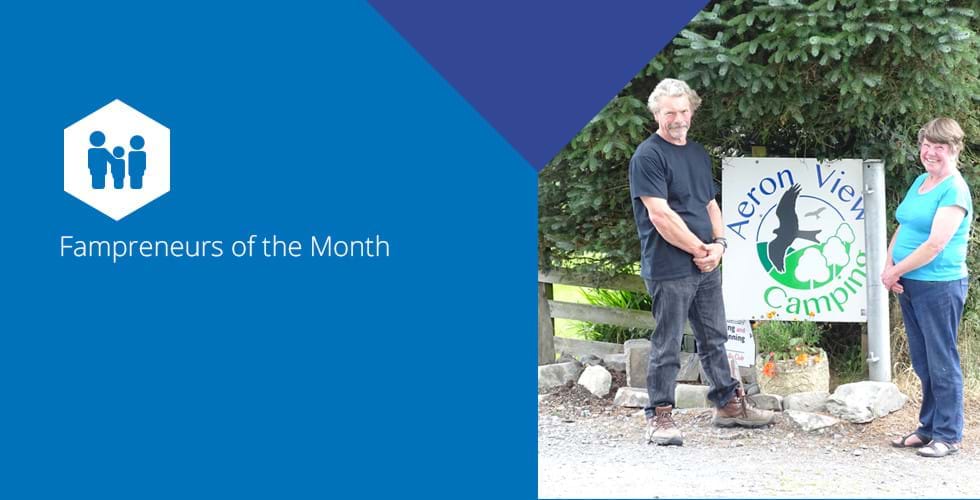 Before becoming fampreneurs Nick and Dina Downs were living in Dorset. Dina had taken early retirement from her role as the Supervisor of the Advertising Standards Department at Exchange and Mart and Nick, who was working as a teacher of construction and mechanics, was keen to follow suit. Together they decided a campsite was the business they wanted to build and so they set about searching on the web.

“The geographic location was of no real importance to us, we were happy to relocate anywhere in the UK” Dina explains, “But we were committed to finding a site with natural beauty and close to attractions that would make the business as viable as possible.”

After a two-month search Nick and Dina found Aeron View Campsite in Blaenpennal, Wales in November 2014. The natural beauty of the site and the views it enjoyed made it incredibly appealing to the outdoors type lifestyle. In addition its location was close to Aberystwyth Theatre, Strata Florida Abbey alongside many beautiful beaches and countryside.

“Once we’d seen it online we were sure we’d love it, and the first and every subsequent visit proved that initial instinct right.” says Nick. “For me the icing on the cake is the wake of Red Kites who nest there.”

“We were really keen to get the wheels in motion and our own property sold within three days. The purchase was held up a little by additional forms but once we’d jumped through the hoops we took ownership of the site and moved ourselves and my parents in just before Christmas.” He continues.

On arrival Nick and Dina had their work cut out for them. The previous owners had done little to the site for fifteen years, they had run it as a static caravan park and Nick and Dina wanted to reorganise the layout to enable touring pitches where the caravans were sited. So the caravans were moved, power supplies were brought in and a reception area with a shop plus toilet and shower blocks were built. In all there was 120 hours of digger work and a massive 500 tonnes of aggregate was brought in so it was a sizeable project.

With his construction know-how Nick was able to project manage the job and researched and appointed local suppliers and contractors to undertake the work. Needless to say this took a fair bit of time and money but it meant the Downs had achieved what they’d set out to do and could reposition the business in the marketplace and attract new customers. Using local suppliers was also a great way to support and integrate with the community.

In addition Nick’s parents also sold their property in Dorset and moved to the annex attached to Nick and Dina’s house. Although both are retired Nick’s parents Bryan and Maureen are naturally suited to handywork and have been a practical help in most aspects of the site, particular the decoration and modernisation.

Since the previous owners had taken the site phone number and customer database with them Nick and Dina faced the additional challenge of building their clientele from scratch.

“Of course this was an uphill task but in some respects cathartic for the site as the reorganisation and new focus on camping meant our market was different to that of the previous owners.” Dina says, “So we set about building a website, developing a Facebook page and listing ourselves on websites where we knew our target market would look, like Cool Camping and Pitchup.com as well as taking advantage of the free support and advice offered by Business Wales.”

“Without any TripAdvisor reviews we needed to provide reassurance to our customers that they were coming to a good quality campsite,” Nick adds, “So we secured and now proudly display our three star rating from Visit Wales and five star rating from Environmental Health on all our promotional materials.”

The promotions, associations and accolades have certainly done the job. In the first two weeks of July Aeron View camping took 106 bookings not only for tent pitches but also for touring vans, campervans and the static caravans they’ve retained elsewhere on the site.

"Another shift we’ve been made aware of is the business our customers now bring to local enterprises. The old caravaners would bring all their supplies with them and use the fridges and cookers in the caravans. Our new campers tend to travel lighter and so enjoy local produce and local eateries more.” Dina says.

When asked if the dreams of ‘early retirement’ have come true Nick laughs, “In truth I’m working harder now but we’re still at the front end of building the business, so it’s pretty inevitable. I think in years to come we will have more time to enjoy the countryside for ourselves, and if our first season is anything to go by it won’t be long!”