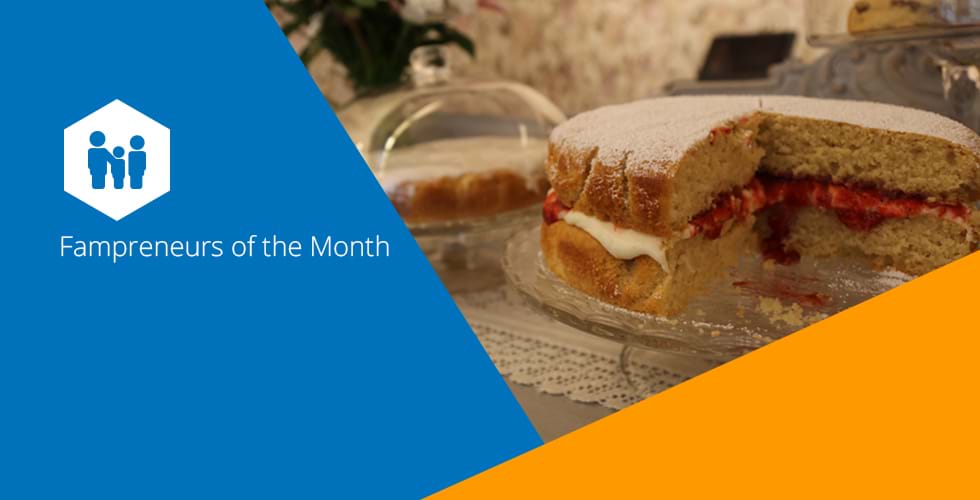 From Coppers to Cuppas

Claire and Nick Hearn both had safe jobs in the Metropolitan Police. But despite all the security their careers offered for the long-term, 13 years into his career Nick began to wonder whether a policeman’s lot was really for him.

He began to pursue his passion for food by training as a chef part-time alongside his established job and soon began to realise that he was happier in a kitchen than working for the force and began discussing a career change with Claire.

Claire’s passion is all things vintage and together they saw that their two interests could easily combine to create a vintage-themed catering business.

However, making the leap from the safety net of employment to taking the risk of running their own concern was not going to be easy.

“Looking back, we realise there was nothing to worry about,” Nick explains, “But at the time we were institutionalised to an extent, we were unfamiliar with the freedom and opportunities becoming fampreneurs would bring. So, from the outset, our departure from the police was very considered.”

Rather than starting from scratch, the couple bought an established catering business that was for sale. It meant they had the initial resources to offer a catering service but the brand was a far cry from the one they wanted to build.

Claire explains, “We were confident that the catering was only a fraction of the offering. How we presented ourselves as suppliers of vintage tea parties was going to be our selling point.

So, we began to build our brand. First came the new name – Rose and Olive – after my two grans, then came the look and feel from which we created our logo, around which we built our website and for which we invested in those special touches like bunting, ornaments and tablecloths so we could dress our events to create a real sense of occasion.”

Claire scoured boot fairs, vintage shops and specialist suppliers to fill her vintage vault and the fixtures and furnishings she found now always receive compliments and arouse the interest of the customers.

Once this was done the couple launched Rose and Olive the traditional way – by word of mouth to friends and associates but using modern tools like internet marketing and Facebook. Orders started coming in, repeat business and recommendations soon followed and very soon Rose and Olive was appearing at corporate events, vintage festivals and family celebrations all over the South East of England.

“We had to pinch ourselves a bit,” Claire says, “because despite having success early on it was still a culture shock and it took some time to realise that we were self-employed, we were running a successful business and we were free of the constraints of our previous careers.”

Nick adds, “Having worked as police officers we were able to transfer the skills of being good communicators and working well under pressure in our new context of a fampreneur business. Now we’re really comfortable with the concept that the only limitations are those we determine, the sky really is the limit.”

Within their first year, Nick and Claire evolved the mobile aspect of the business to create a pop-up tea room which can be booked for private and corporate events and also took out a lease on their first premises in Uckfield, East Sussex to give Rose and Olive a bricks and mortar home.

“For us, it’s all about evoking and creating memories.” Nick says, “Customers who come to our tea room appreciate they’re not entering a soulless coffee chain, they are experiencing an exclusive ambience coupled with really great service and fresh food.”

When asked how working together suits them Claire explains they have very defined roles. Nick is in the kitchen taking care of the catering side of things while Claire is front of house ensuring the customers are well looked after.

When asked whether they’d recommend a similar move to other couples in their previous shoes the answer is yes. “If you’re passionate, determined and prepared to graft you can make it work. Do your homework first to see how viable your idea is and then go for it.

Try to harness the skills you already have, like we did, and success should come easier” Claire advises, “And don’t worry about becoming your own boss, as soon as we relaxed and realised we could do it we haven’t looked back.”