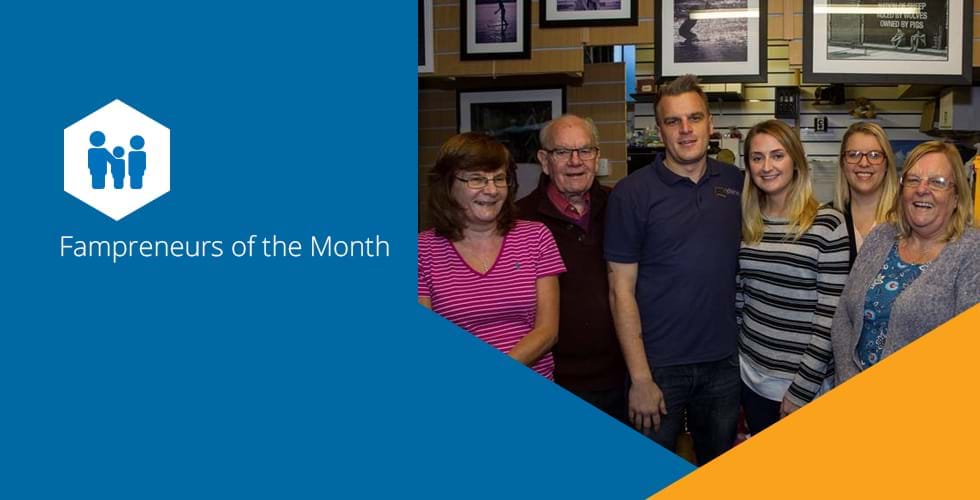 When Richard Gabriel travelled the world as a scuba instructor and underwater photography teacher, he didn’t imagine he’d be setting up shop with his grandad, parents, auntie and sister any time soon. But his life changed dramatically when a serious accident while diving in 2012 brought Richard back to the UK to recuperate.

The recovery was slow but steady and as he regained strength Richard was determined to support himself. His granddad, Jim, who worked in financial services, offered him a new career. Richard accepted the role and set out to gain relevant professional qualifications.

“I really enjoyed the work,” he says, “but I took on too much too soon after the accident and couldn’t be as reliable as the business needed me to be owing to ongoing hospital appointments.

“But I still wanted to stand on my own two feet, so I set about searching for a business opportunity that I could pursue, one for which I could be totally self-reliant.”

Richard found a business on BusinessesForSale.com in Leominster, Herefordshire. It was an art gallery, so he spent a couple of months training in picture framing and printing with the vendor, who was retiring.

In August 2013 Richard became sole proprietor of the business and decided its picture framing service offered the best scope for growth. However, the location, a tourist hotspot, meant income was largely seasonal, so he felt that relocation was his best option for boosting revenues and establishing year-round buoyancy.

Meanwhile, Richard’s grandad and mum, Alison, were both retiring, so the family got together to discuss the merits of some retail premises available near their Lancashire homes.

Richard already knew he could work with Jim and felt his financial experience would be invaluable. Alison, a teacher and great people person, thought she would prosper in a retail environment and everyone agreed that her creative skills could be put to great use in curating the shop’s window displays.

Together the family found premises in Darwen, near Blackburn, which was close enough to everyone’s respective houses.

Ailsa, who handmakes many of the goods, says: “There must have been a latent demand for personalised presents locally, because as soon as we were up and running the customers and orders kept coming in, peaking as you’d expect in the run-up to Christmas.”

In March of this year, the lease on the Darwen premises expired, so Richard decided to move to the market hall in Accrington, where most of his family had lived for many years and were well known in the community. Unfortunately, the new shop was too small to accommodate the frame-making process, so his parents’ garage was commandeered as a workshop and the framing business has continued to thrive.

To sustain the momentum, mum Alison dons the “PR and marketing hat” and has overseen a dramatic jump in Facebook followers from 100 to 750 during this year alone.

“I am sure that because we run the business as a family, the customer care we give alongside the high quality of our products has been a key component in our success,” she says. “Social media is a great way of spreading the word and sharing genuine customer feedback, and it continues to bolster the business.”

Not content with two successful revenue streams, Richard added a third, returning to his love of photography and film. In November 2014 he launched the ‘Simply Wedding Videos’ service, with a mission to record weddings – capturing those special moments an amateur photographer might miss – at competitive prices.

The service has been a resounding success, with more than 40 wedding bookings this year and many already reserved for 2017, 2018 and even 2019.

Richard’s dad, Paul, also helps in the shop – called ‘In the Frame’ – at busier times, particularly when Richard is off site filming, editing or picture-framing, while sister Katie, a university undergraduate, attends the more complex shoots and does her time on the till too. She also assists Richard with the custom-built photo booth.

The Gabriel family’s next step is to find larger premises and do more of what they do best, all under one roof. Over time Richard believes the video and photography business will split from the picture framing and personalised-goods business and both must employ staff from outside the family.

Richard’s fiancée, Alison, may yet get involved in the family business. As for who will film the nuptials, Richard hasn’t decided, but he’ll need a second videographer if he’s to secure the booking himself!