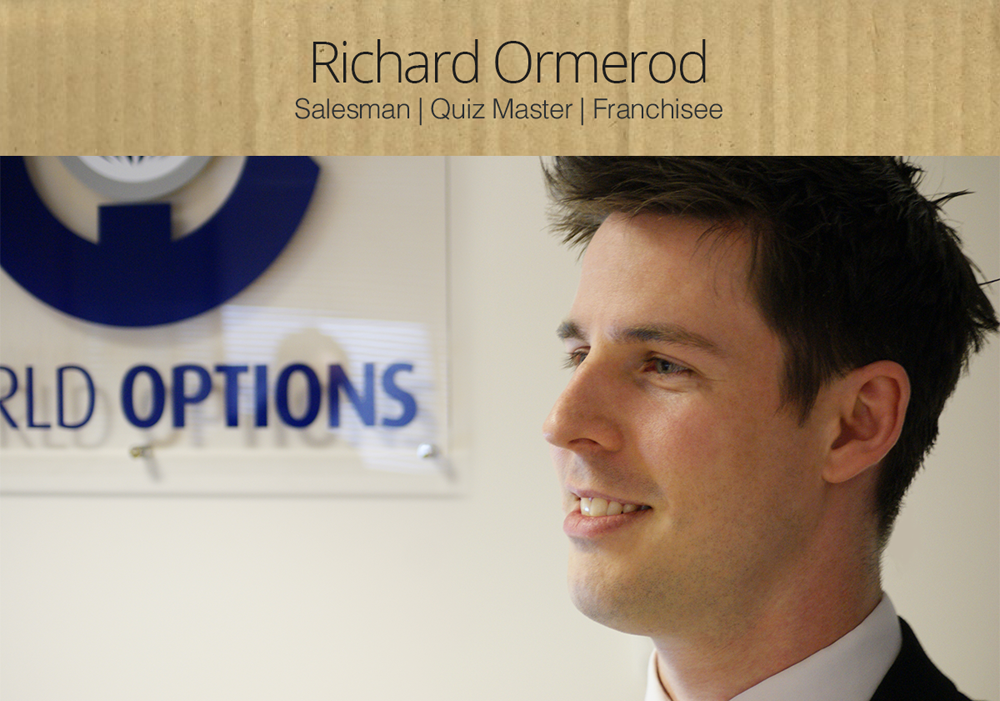 At just thirty years old, Richard Ormerod is one of World Options’ most successful franchisees, and a walking talking advert for their business model.

Richard‘s education includes a degree in Law and a Masters in IT, but the sales industry is where his professional life led him. From software insurance sales, database management sales and back to insurance, Richard then took a sales rep role with World Options selling their courier services.

When World Options began franchising in 2012, Richard could see the potential from ‘the inside’, and decided he wanted a piece of the action. He could see the income possibilities and of course the value of working for yourself, so set-up his own World Options franchise business in December 2012 and he hasn’t looked back since.

Richard’s franchise began with a zero customer base, as of course World Options have their own clients who he couldn’t take with him. However Richard now has 65-70 of his own customers, a steady increase and an annual turnover of nearly £250k.

So good is Richard at the franchisee side of the business, World Options actually asked him back to be part of their Franchisee Development Management Team. Having been on both sides of the fence, his scenario is quite unique and he is perfectly suited to help new franchisees get their businesses off the ground. Richard now helps new franchisees in their early days, offering training, support and of course his own experience. He now splits his time between the two roles.

With the two hats to wear, Richard now has one full time and one part time member of staff in his World Options franchise. He not only reaps his own rewards, but is successfully employing others as well. If working solely on his own franchise, Richard is totally convinced that his customer list would be far greater as he would have more time to dedicate to his own sales.

Richard also benefits from an improved work/life balance. As his customers tend to work the usual 9 to 5, so does Richard, and of course with less commuting to do, he has far more free time than he did in his life as a full time sales rep.